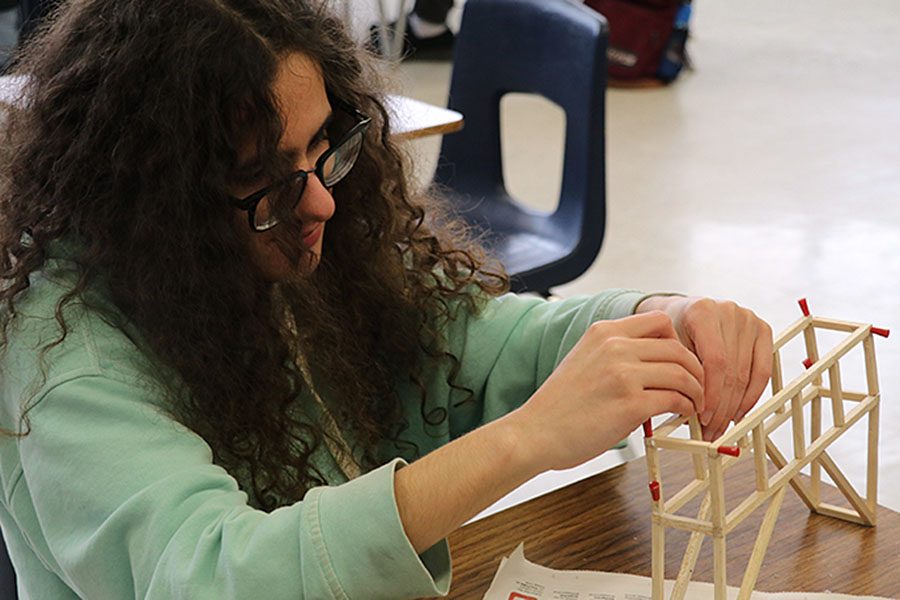 Freshman Alex Light penetrates the support beams with pins in order to keep the structure together. He is attempting to make the best civil structure bridge for the MESA Day Competition, which will be held tomorrow at the University of the Pacific.

Whether it’s building a mousetrap car or a prosthetic arm, preparation and perfection has been all that MESA students have focused their efforts on in order to succeed in the annual MESA Day competition. Tomorrow at the University of the Pacific, Stagg’s MESA students will compete against other local teams with the hope of qualifying for the regional competition.

However, the journey to this event has been full of twists and turns. To begin with, the MESA program has experienced a major change in leadership. In past years, advisors Andrew Walter and Kathy Sady worked together to run the program, with Walter taking the lead. Since Walter’s been promoted to a position at district level, Sady’s found herself taking on more of the advisor responsibilities.

In a couple of words, she describes this change as making her “life very interesting.” “Now, I’m taking more of the lead and it has made me realize how much work that man does to keep MESA going,” she said.

Even if it poses a challenge for her, Sady still sticks around to get the job done. “He’s still around and helps me out, but I’ve been trying to take on more of the stuff myself to release him to his own duties.”

Senior Jonathan Uribe recognizes this adjustment as a struggle that they’ve yet to fully overcome. “Sady is a good teacher and has been doing a good job at transitioning, but it’s more difficult with just one teacher and not two classes,” Uribe said.

For the previous months, the focus of the class and club have been to work on their MESA Day projects. However, another challenge came across their path. “A lot of the projects are new this year, so that’s good and bad,” Sady said. While it helps to bring life into the program, it gives students nothing to build off of.

Despite these challenges, the program hopes to continue their winning legacy. “Last year, we placed in a majority of the competitions,” Uribe said. “Even if we have fewer experienced members, we’ll do our best to win.”