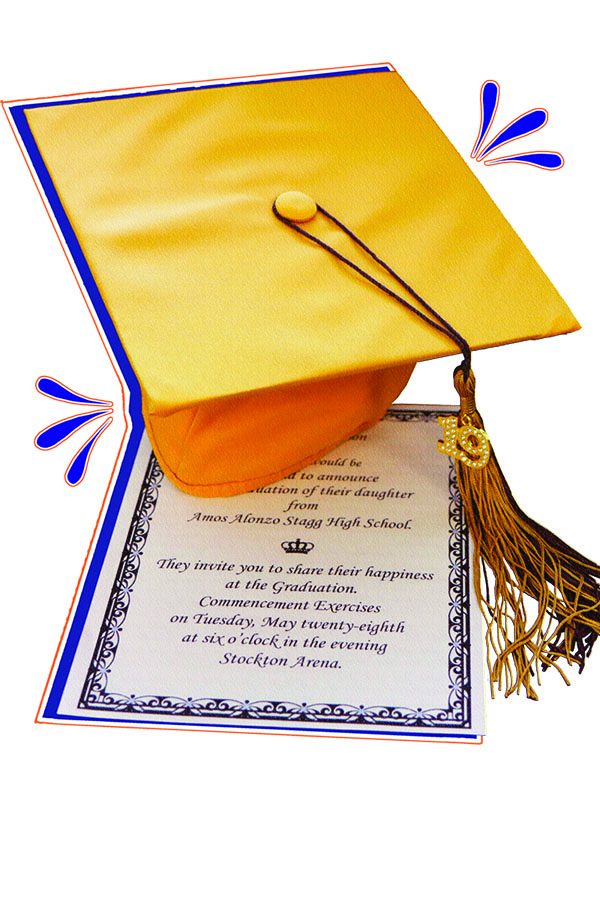 Mena Torres has always been excited to graduate, but now she is ecstatic she will actually be able to attend the ceremony.

“I planned a vacation to Mexico with my cousins who are also graduating,” the senior said. “Now I don’t have to cancel my trip. This means a lot to me.”

Flash back to Feb. 8 and the Class of 2019 was in an uproar. “Graduation will be May 30 at 2 p.m. at the Stockton Arena,” ASB Advisor Ryan Berg announced at a senior assembly. Confusion, anger, and disbelief filled the room when the students realized this annual ceremony was being altered. “That’s not okay,” senior Arianna Perez said. “This is our big day. My parents have planned their day to be there on the 28th, not the 30th.”

For many, it was the change in time that frustrated them most. “My mom works Thursdays. She doesn’t get off of work until 5 p.m.,” senior Jaeden Bowen said. “It’s very hard for her to request days off of work.”

With many concerns, students wanted answers as to why graduation was being moved.

With months of coordinating graduation dates among all the SUSD public high schools a consensus was reached. Three of the four high schools had to graduate on the same day somehow. Trying to make sure every high school met that schedule, three of the high schools would have had to share the arena on May 30 at separate times, but that is no longer the case.

The seniors were not the only ones upset with this sudden reschedule. A number of Stagg parents took the matter into their own hands and took a trip down to the district office.
Parent Michelle DeVille was one who voiced her opinion. “I thought it was kind of frustrating that the school put out a date at the beginning of the year and kind of last minute changed it,” she said.

“I reserve the arena a year in advance,” Phillips said. “The day after we graduate we call the arena we ask to reserve the last Tuesday of May. It’s always kind of been that way.”

Typically the seniors get to have their last celebration before getting their diplomas the previous Friday with a senior picnic and have their rehearsal the morning of graduation. “I felt it was important to let this Class of 2019 to have the same experience as all the classes that came before them,” DeVille said. “To change it to Thursday would have messed with the tradition with graduation at Stagg.”

After many parents advocated for graduation being changed back to the original date, their concerns were addressed and solved. “I was told yesterday at the principals’ meeting that we’re going back to our original date,” Phillips said last week.

When students caught wind of the big news there was a mix of emotions. For senior Gene Lewis the change wasn’t a big deal. “The date didn’t really matter to me, as long as my parents and grandparents were there to see me graduate,” he said. “My family is pretty much off work by 2 p.m. so it wasn’t going to be an issue.”

Senior Keith Smith is glad he can enjoy the day he has waited for since freshman year. “This is our big day,” he said. “Having the proper setting and time would be good for all of us.”

To make sure the attendance issue is still resolved, seniors will have to return to school the next day after graduation. To make sure these seniors return, they will not be issued their diplomas the day of graduation. “You’ll get your diploma at the end of the (last) school day,” Phillips said.

While she is excited that she gets to go to Mexico, Torres doesn’t agree with the district’s decision to make seniors attend the last day of school. “Our class attendance already is terrible,” she said. “I’ve never seen so many absences in all my years of being here.” She doesn’t see the issue with seniors missing the last day of school. “Attendance has been an ongoing problem throughout the whole school year,” she said. “What’s one day going to do?”

Perez, on the other hand, is unbothered by the decision. “I don’t mind coming to school the next day,” Perez said. “As long as the day is changed and my family can make it to my graduation.”