Divorce affects teens at home and in school 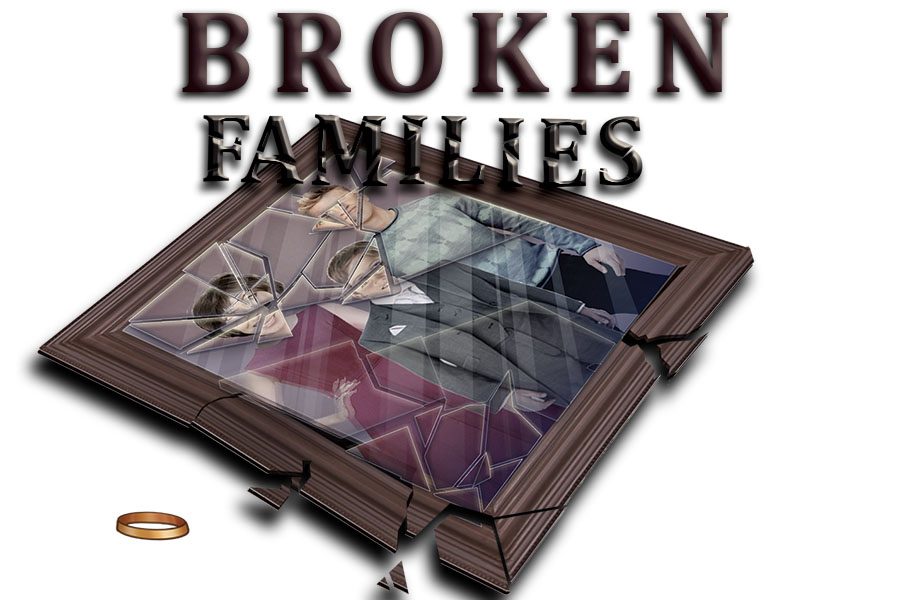 As she would come home from school, senior Hailey Edwards became used to a scenario that transpired all too often. Even if her parents were trying their best to hide it from her, they would eventually burst out into an argument, prompting her older brothers to intervene and take her away from the altercation. Witnessing her parents’ divorce at a young age, little did she understand how much it would affect her life.

Edwards was only 6 years old when the problems started to grab her attention. “At first, I didn’t really understand what they were arguing about,” she said. “Once I realized they were talking about getting a divorce, I was hurt and upset like how any child would be. No one wants their mom and dad to fall out of love.”
This went on to affect her overall mood, especially at school. “I would sometimes just shut off and worry about if they were going to actually get a divorce, but at the same time school was my getaway from the arguments at home.” From there, she started to gain problems of her own. “In a way I kind of wanted to just pull away from life, but at the same time I wanted to be stronger and push forward.”

Edwards’ situation is not rare. According to a Time Magazine article from November, nearly 4 out of 10 marriages end in a divorce. With such a high number of divorced couples, this leaves a great number of children living in broken homes with the risk of mental, educational, and social problems.

For senior Jacob Stillwell this past Christmas was anything but merry. “My mom and I were moving, and we already knew my dad wasn’t coming along,” he said. Since Stillwell had the opportunity to watch his parents’ relationship as he grew up, he was hit hard and looked at school as a retreat. “This entire atmosphere of school is perfect for students to live a life away from their personal problems.”

Divorce is hardly new. For counselor Kevin Oki, he looks back on it as a rough experience that he was able to learn from. “We thought it was our fault because when they would argue, they argued about us,” he said. Frustrated, both parents were actually arguing over who would have custody over Oki and his siblings.

It wasn’t until about nine years later that he started to open up and accept his parents’ split. “As a kid, you’re not able to understand why your parents are divorcing. Around my freshman or sophomore year, I began to realize that it wasn’t our fault but just a normal thing that some married couples go through,” Oki said.

Even after this realization, he began to face problems in school, similar to Edwards. “I had a lot of friends that still had their parents together and, in a way, I felt jealous.”

After her parents’ divorce, junior Karis Carter lived with only her mother, but at the expense of weakening the relationship between her and her father. “There would be some moments where I would talk to my dad and then in a split second I would just stop and be super quiet,” she said. It wasn’t until she was 13 years old that she realized it was because of how broken their bond had become.

“When it was my freshman year, that’s when we started hanging out more.” To this day, Carter and her father continue to make plans for little dates, whether it’s going out to eat at Denny’s or going for a walk at Victory Park. “Now, I don’t even feel the gaps between when we talk.”

Even though the relationship between the child and both parents has great importance, the relationship between the parents is crucial. Ideally, the parents should share the duties of raising their child while living separately. All three students live with only one parent rather than switching off, but still keep in touch with and visit the other parent.

For Oki, who went through the experience of switching between parents, he stresses the importance of healthy co-parenting. “It’s very important to co-parent because the child needs to know it wasn’t because of them. It was because the mom and dad couldn’t get along.”

Though the divorces may have been bumpy, most agree it was needed. “When I was little, I used to think it would be better if they stayed together, but that was just the little kid in me,” Carter said. “It was better for them to divorce because all they would do was argue.”

Years later, Edwards’ parents are able to be in the same room without any arguments. “My parents get along a lot better and put any problems they’ve had aside,” she said. “Divorce isn’t always a bad thing and it shouldn’t be thought as that.”