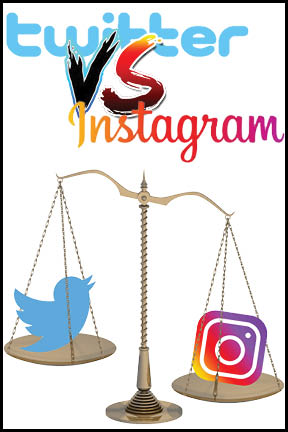 Last year if I was asked if Twitter or Instagram was the better social media app, I would’ve instantly said Instagram just because I didn’t even have a Twitter account. Nothing, besides constant nagging by friends to make one, sparked interest in me. What could be so joyful or funny in words tweeted? One year later, I wholeheartedly say Twitter is the superior app.

After a week or two of having a Twitter account, I became bored and took a break from it. I still couldn’t find what was so good about the app. Weeks later I returned and became obsessed with Twitter. It came to the point where I would close the app, then reopen it two seconds later. The secret to why Twitter is so funny and satisfying was finally uncovered.

It wasn’t specifically the app overall, but instead bits of content that made the app worth keeping it. Out of about ten tweets, at least two are beyond hilarious. The funniness of the content on Twitter reaches a peak that Instagram content can never reach. In fact, my sense of humor has probably changed thanks to my countless hours on Twitter.

Other than the hilarious content, there’s also the drama that pulls in people’s’ attention. While it may not be as common as the funny posts, it makes up with the amount of interest it provides. Whether it’s between people you know or just celebrities, almost everyone wants to know who’s arguing and why. It’s as if people argue just for the entertainment of others considering everything is public.

So yes, after having accounts on both apps I can say that Twitter is better. Although Instagram does have better methods of expanding where your content comes from, Twitter somehow has a way of having much better, funnier content. I can’t even count how many times I’ve bursted out laughing from a video that shouldn’t be funny in the first place.