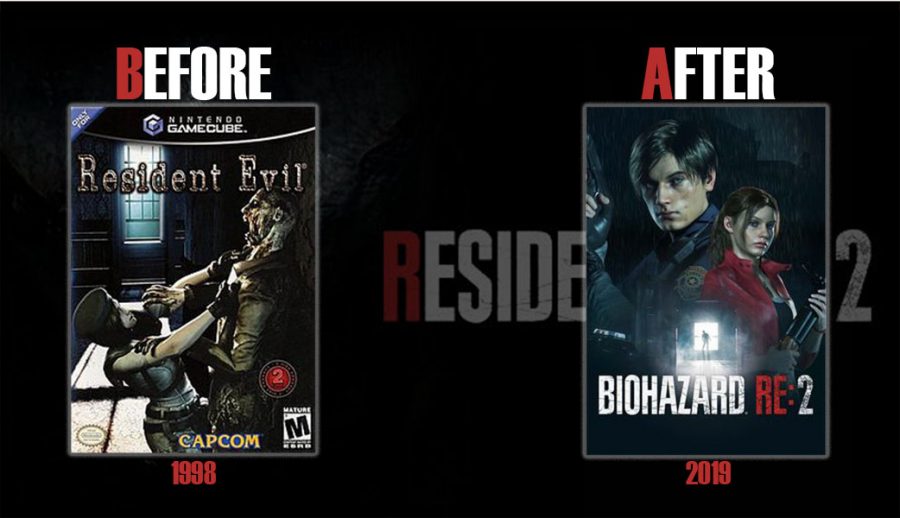 The “Resident Evil 2” remake has resurrected the older 1998 version back from the grave. In the game you play as a newly commissioned police officer, Leon Kennedy, who has just been assigned to the Racoon City police department. You discover that a hazardous virus has plagued the town and created an army of the undead. You must escape the town and help your new found friend, Claire Redfield, find her brother.

Although the remastered version has little originality, it makes up for its stunning graphics and compelling visuals.

The original version of the game was only able to be played on the old gaming systems. It shows characters that look blocky and polygonal. Red tints would cover objects as a references to blood for a more gruesome scenery. This was considered graphic material that scared many viewers. The game itself made the players feel defenseless, but the original game shared that similar old horror movie feel as today’s horror movies.

Compared to today’s horror, audiences need a more gruesome and violent look to feel therenated and the remastered version is able to pull back those brave fans into the updated version. Most aspects of the game have stayed the same. Limited resources and too many chances to waste your needful ammunition, again, create that defenseless gameplay that made the original so iconic.

Although the game is beautifully redone with its graphics, the audio and abundance is noteworthy. In the game, an invincible character stomps around, searching for you. From several rooms away you can hear those metal shoes come closer. You quiver rapidly knowing that he might be around the corner waiting to grab you. I only felt confident and strong when I was full of health and ammunition, but those emotions dispersed when I would check my inventory and see the scarcity of my supply.

Other enemies also share a bizarre and terrifying sound. One other enemy called “lickers” are very horrying because of the sound. Unlike most enemies in the game, these monsters will only attack you if you make a sound. Instead of being scared of the savage licking sounds they make, you worry about your own sound. Numerous times I would almost scream and yell at the realization that I made too much noise.

Overall the game shares the same compelling story that intrigued fans to play the rest of the series. “Resident Evil 2” is a anxious game to play but will intrigue you to finish till the end.